Fresh from the journey of Lent I am not in any hurry to start blogging again, as such, but I will begin to share some good quotes that I have come across.

“Then exactly what are good thoughts concerning God?” Ignorance wanted to know.

Christian said, “…When our thoughts of God agree with what the Word says aboiut Him, then they are good thoughts. That means when we think of His character and attributes as the Word teaches.

“However, to speak of Him concerning ourselves, when we understad that He knows us better than we know ourselves, and that He can see sin in us when and where we can see none in ourselves; and when we understand that He knows our inmost thoughts, and that He at all times sees into the depths of our heart; and when we think that all our righteousness stinks in His nostrils, and that for this reason even with our best performance we still cannot stand before Him with any confidence, then our thoughts are good…”

Studies have shown that those with the fewest resources are often those who are the most generous, perhaps because when you are poor it is far easier to see your neighbour as yourself?
A timely post from A Pastor’s Thoughts on our beautiful Servant King. Freely we have received!

Sociologist Robert Wuthnow of Princeton University has explored how it is that people make everyday ethical decisions. Many people, he found, perform deeds of compassion, service, and mercy because at some point in their past someone acted with compassion toward them. He wrote, “The caring we receive may touch us so deeply that we feel especially gratified when we are able to pass it on to someone else.”

He tells the story of Jack Casey, who was employed as an emergency worker on an ambulance rescue squad. When Jack was a child, he had oral surgery. Five teeth were to be pulled under general anesthetic, and Jack was fearful. What he remembers most, though, was the operating room nurse who, sensing the boy’s terror, said, “Don’t worry, I’ll be right here beside you no matter what happens.” When Jack woke up after the surgery, she was true to her word…

‘As most certainly the way to please God is to keep the commandments and counsels, let us do so diligently, while meditating on His life and death and all we owe Him. Then, let the rest be as God chooses. Some may answer that their mind refuses to dwell on these subjects and… this to a certain extent is true; you know that it is one thing to reason and another thing for the memory to bring certain truths before the mind. Perhaps you may not understand me, possibly I fail to express myself rightly, but I will do my best. Using the understanding much in this manner is what I call meditation.

Let us begin by considering the mercy God showed us by giving us His only Son. Let us not stop here, but go on to reflect upon all the mysteries of His glorious life, or let us first turn our thoughts to His prayer in the garden, then allow them to continue the subject until they reach the crucifixion. Or we may take some part of the Passion, such as Christ’s apprehension, and dwell on this mystery, considering in detail the points to be pondered and thought over such as the treachery of Judas, the flight of the Apostles and all that followed. This is an admirable and very meritorious kind of prayer.’

Addendum: The following is a paraphrase of the above in more accessible English (I imagined communicating the same ideas to my daughters).

The best way to show our love for God is to try very hard to keep His commandments and do what He teaches us through the bible. As we do this, we can also give thought to Jesus’ life and death and everything He did for us, and we can think about how our lives can and should be different now that we belong to Him. Don’t worry about trying to achieve more than this, though. Let God show you where to go and what to do next. I know some reading this will be thinking that they find it hard to keep thinking about these things, which is fair enough. Our minds don’t always stay focused on what we’d like them to stay focused on. However, when we do make use of our hearts and minds by thinking about these things in this way, this is what is meant by ‘meditation’.

Here are some ideas to get you started: first, think about God’s great mercy when He gave us His only Son. Then move on, considering all the amazing things in Jesus’ life. Another way to begin might be to think about Jesus’ prayer in the garden of Gethsemane before He was arrested, then you could imagine the actual arrest and Judas’ betrayal and how the disciples all ran away. Thinking about these kinds of things in this way is not only a type of prayer but a very beneficial kind of prayer.

Any thoughts on either the words from St. Teresa, or on my paraphrasing?

We had our Easter egg hunt this morning, after we had read the Easter story in the Jesus Storybook Bible. Even Prince sat quietly and listened. I have to admit my eyes prickled and I had to pause when I came to this sentence: Was God really making everything sad come untrue?

Joy for sorrow, life for death, beauty for ashes… the whole world on its head and the Kingdom of God found among the lowly and broken. How wonderful!

Mary fell to the ground. Sudden tears filled her eyes and great sobs shook her whole body, and all she wanted in that moment was to cling to Jesus and never let him go.

“You’ll be able to hold on to me later, Mary,” Jesus said gently, “and always be close to me. But now, go and tell the others that I’m alive!”

From The Jesus Storybook Bible: Every story whispers his name

This beautiful song was posted by Thomas over on his blog. Thank you, Thomas, for introducing me to the music of these two very talented musicians. I shan’t add any more as I think the song speaks for itself.

As posted on The Vicar’s Wife blog.

Puts a different spin on

“Give us this day our daily bread”

My beloved Frank has told me (he being the one who has studied theology, history and New Testament Greek) that what that line of the Lord’s Prayer really means is ‘give us bread for today’. In other words, we are asking God to provide enough just for today. In the context of first century occupied Israel this has even more importance. There were famines; the people were poor. Nonetheless, Jesus doesn’t teach us to pray for ‘abundance’ – not in the physical, worldly sense – but to pray simply for enough food to feed my family for today, relying on God for tomorrow. Now that’s faith and, in God’s Upside Down way, this is abundance.

Yesterday we remembered Christ’s crucifixion. Yesterday we mourned his wounds, wept for his spent blood, gasped at his pain.

Traitors of the Roman Empire were sentenced to crucifixion. It was used as a way to control the natives, such as the Jews in first century Palestine (and it’s clear just from the gospels how despised these Roman invaders were). Bit like the modern ‘shock and awe’ in its intent. Also, to die ‘hung from the tree’ was, in contemporary Jewish thought, a form of curse. A curse was reserved for the scum of the earth, the lowest of the low. Filth. Detritus.

This is why Paul says in his letter to the Corinthians

‘…but we proclaim Christ crucified, a stumbling-block to Jews and foolishness to Gentiles.’

You can read more about this in Not Ashamed of the Gospel: New Testament Interpretations of the Death of Christ by M. Hooker.

Crucifixion was designed to be torture, in every possible way, leading to a lingering death. It was created to be as horrible as it could be and deliberately so. It was intended, by the ubiquitously inventive Romans, to set an example to others, and so control a restless population. Over several days, Jesus was stripped of everything until, naked and already severely beaten, he was nailed to the cross.

“Eloi, Eloi, lama sabachthani?” He cried out at last in his mother tongue, Aramaic. My God, my God, why have you forsaken me? Perhaps the most heart-striking words in all the bible; separation from God.

The painting below is a 15th century depiction of where the gluttony of violence began: 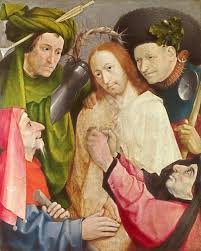 This painting can be viewed in the National Gallery in London (to read more about this amazing picture, click here. It will open in a new tab). I first saw it on my honeymoon. My husband had taken me to see it. The painting sits in an underground, darkened room, but draws your attention as soon as you see it. You walk closer. It draws you in. Christ looks out at you from the picture as if to say,

“And what about you?”

And what about you? Part of modern folklore, for want of a better word, is that if you or I had been there, we too would have participated in Christ’s death, or abandoned him to his fate. This folklore says that all Jesus’ friends left him. All who had ever loved him abandoned him in that moment.

But they didn’t. The disciples scattered, but the women were there. And on that beautiful, sorrowful, morning of the third day, the women were still there, this time to bring spices, to perform their last act of love in preparing the body.

Women, who were considered less-than, women who were the property of their male relatives, women who could not own land, who had no control over their destiny, etc., etc., these were the last at the cross and the first at the resurrection.

‘…for God selected (deliberately chose) what in the world is foolish to put the wise to shame, and what the world calls weak to put the strong to shame.

So that no mortal man should [have pretense for glorying and] boast in the presence of God.’

God chose me too, lowly and shamed, rejected and neglected. Treated with contempt. I should be forever on my knees in thanks. If God can choose me, and use me, He can use you. Don’t give up hope.

I am not Roman Catholic, but I have to say how much I rate this new pope. I shall continue praying for him and for Justin Welby, leader of the Anglican Union (though I’m not Anglican, either). May we see a wave of change sweeping across the globe, sharing the Gospel of Love in Thought, in Word and in Deed. May we see the unity that Jesus prayed for, on the night He was betrayed, when He prayed for all believers:

“My prayer is not for them alone. I pray also for those who will believe in me through their message, that all of them may be one, Father, just as you are in me and I am in you.May they also be in us so that the world may believe that you have sent me.”

With thanks to Rachel Held Evans’ Sunday Superlatives for the link.